In the interest of being lazy, I've been trying to use the crock pot more often. And so, when I came across this dish over on Closet Cooking, I immediately pinned it. It would be pretty easy to "paleo-fy" it if I whipped up my own barbecue sauce, which is something I'd wanted to try anyhow so...win-win!

I'm not gonna lie: the BBQ sauce I made for this dish pretty much stole the show. Big words for a meal that included my beloved bacon!

Now, don't go judging the photo because admittedly, the picture looks horrid, the food itself tastes amazing, which is what matters, right?? Please, humor me and just agree! 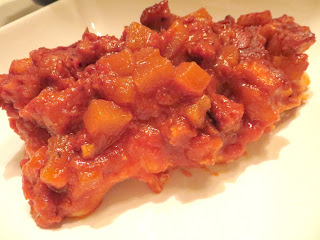 Eeeek! Someone get me to a food-styling class STAT!

1. Trim the fat off of your chicken breasts. Slice each breast in half horizontally.
2. Wrap each piece of chicken in two slices of bacon. Place in the bottom of the crock pot.
3. Mix the BBQ sauce, apples, and lemon juice. Pour over the chicken.
4. Cook on low for 4 to 6 hours.

A couple of notes:
*If you want to leave the breasts whole without slicing, that's obviously fine - just use four of them and cook them on low for 6 to 8 hours.
*I thought thick cut bacon worked super well here but use whatever you have on hand.
*I used probably a heaping 1 cup of BBQ sauce because I'm a saucy lady (haha).
*And finally, I used Empire apples and cut them chunkier so that they'd hold up during cooking. The added texture of the apples was great.

I'll be back with a post about my paleo BBQ sauce recipe soon. While it was super amazing in this dish, I've gotta test it on something else before I test it out on you all. ;)