After seeing it reviewed on the Phantom Gourmet, Tempo Bistro in Waltham was a restaurant I was dying to try out. As luck would have it, my babe got a package in the mail and there was a Tempo gift certificate included! And all he had to do was purchase a house, haha.

Sandwiched between many other restaurants on Moody Street, Tempo is a don't miss spot in Waltham for a great night out with friends, on a date, or well, anytime. The restaurant is dimly lit and lively. While there, it was continually busy but I never felt rushed while hanging out in this low-key yet classy bistro.

While looking over their (seasonally-changing) menu, we were offered the obligatory bread and butter. This was pre-Paleo so I wasn’t about to forgo the carbs! As it turned out, their butter was spiked with cheese. Yep, I was riding on cloud nine after that little discovery. We ran outta bread before I ruined my appetite, thankfully. 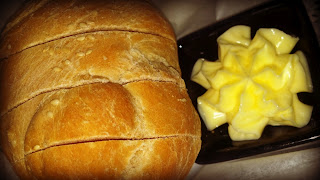 Gluttons Food lovers that we are, of course an appetizer was had. We opted for white corn chips with homemade pineapple salsa and guacamole. The salsa was chunky and sweet & slightly spicy and the guac was pretty good, but not like on my babe’s…he makes the best! Incidentally, I hated guac until I tried his. :) 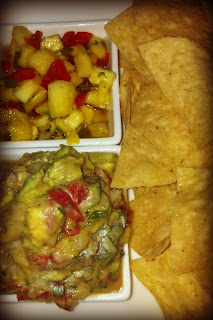 Okay, so let’s get onto dinner finally. I had such a hard time deciding what to eat because I wanted about five different things. The fabulous sounding sweet corn & mascarpone raviolis were a top choice but, ultimately, the Chipotle Marinated Grass Fed Angus Steak Tips won out. Basically because a bunch of my favorite ingredients were involved, including steak, cilantro, chipotle, and gorgonzola. 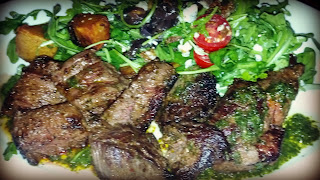 (Excuse the awful picture...camera phone had to do, since I hadn't brought along my real cam.)


The steak tips were cooked to my choice of perfect medium-rare and served with a herby chimmichuri sauce. Everything else was tossed together in a perfect little salad. The colorful pairing made for one happy eater! 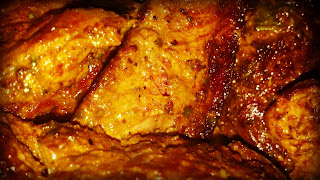 My babe got The Burger, a 14-ounce beef patty, absolutely smothered in sautéed onions. Only served on Wednesdays, this seems to be one of Tempo’s signature draws. I’m telling you – it tasted like the most amazing mash up of a burger and French onion soup. Not only that but the burger wasn’t tough, chewy or dried out like so many burgers nowadays and it was certainly never frozen. In fact, the patty is in-house ground from a variety of different beef cuts.So, while this burger leans toward the pricier side, I think this one is absolutely worth it. 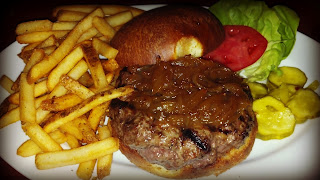 Not only did their entire menu sound fantastic (they just had a simple but delicious way of breaking down each dish) but their specials board was pretty tempting too. Seriously, the hardest decision I had all night was just trying to figure out which dish to try. Oh, and August 20 through September 1 was restaurant week and boy, did that menu look dynamite! I’ll have to remember that for next time.

Wow, I was so enamored with the food that I forgot to mention one crucial element of dinner – the brews. I opted for Great Divide Brewing Company’s Wild Raspberry Ale. It was alright, though I am far more partial to our own home brew. My babe chose an interesting sour beer that was actually brewed in chardonnay barrels – New England Brewing Company’s 668 Chardonneighbor of the Beast. Quite the title, huh? 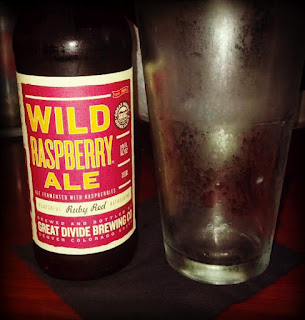 (Why I took this photo with an empty glass is beyond me.)
Since we were completely stuffed, we unfortunately passed on dessert. But from the looks of the dessert menu, I’m betting that next time I’ll save a little room!