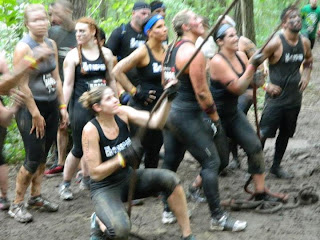 Haha on Saturday, my babe and I joined his sister's team to run the Spartan Sprint in Amesbury, MA. It was an absolute blast! The group was super friendly & enthusiastic and the course was awesome. Compared to May's zombie 5K, the Spartan was a little bit longer and had much better obstacles. The 20 or so obstacles included everything from monkey bars to shimmying under barbed wire to throwing a spear. Oh, and mud, of course... 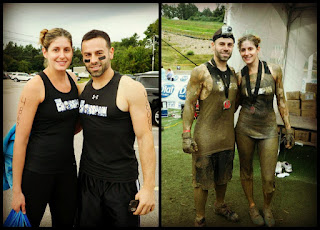 I was very pleased to find that the trail running was much easier for me this time around. I guess that means all my pain and suffering hard work at Crossfit is really paying off! ;)

Sunday found us being a bit lazy and just running errands. And eating tasty food obviously. So, my WIAW this week is brought to you from Sunday. 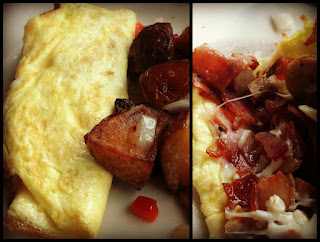 We slept in later than usual so we ended up at Watch City in Waltham for brunch! The omelette was stuffed with bacon, chicken-apple sausage, and ham. Happy day :D

Since we ate late in the morning, dinner was the only other meal we ate. [Except for a couple tasty Kosher dills.] 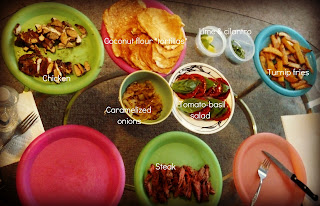 I might have mentioned before but we are planning on giving the Paleo diet a try. We're starting the day after Labor Day! So, experiments have begun so that we aren't clueless about what to make when that day rolls around.

The "tortillas" are quite different since the use of grains and corn isn't allowed on Paleo. They were made using coconut flour and eggs. Texture-wise, a bit eggy and they crack easier. Taste-wise, pretty good! I still plan on experimenting with other recipes but for now:

1. Mix the egg whites and water in a small bowl.
2. In a larger bowl, whisk together coconut flour and salt. Whisk in the egg white mixture until completely combined.
3. Heat a large skillet. Add 1 teaspoon coconut oil and allow to melt. Be sure to completely coat the entire bottom of the skillet with the oil.
4. Pour in 3 tablespoons of batter into the skillet. Quickly spread the batter into a larger, thinner circle by tiling and turning the pan. (Be careful!)
5. Fry 1 to 2 minutes on the first side, or until edges begin browning and lifting slightly. Carefully turn the tortilla over and fry 30 seconds to 1 minute on the other side.
6. Repeat with remaining batter, spreading skillet with another teaspoon of coconut oil each time. 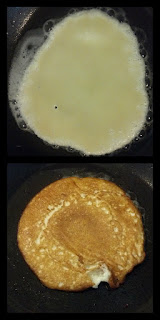 As evidenced by the tear, these do stick a little bit, so be sure to oil thoroughly! After frying the first side, I would lift the tortilla up with a spatula and, using a silicone brush, would brush the remaining oil over the bottom of the skillet before flipping. [Wow, does that even make sense?]

I'd love to hear from you if you try these out, make any successful changes, or have any other recipes you like! :)

Oh, and if you're looking for something to do with all that extra garden zucchini, check out this Zucchini, Banana, and Flaxseed Muffins recipe. It is super yummy, I promise!

Posted by Little Miss Hungry at 12:54 AM