While I have yet to eat my way through their enormous menu, I couldn't resist the opportunity to talk about Zaftigs Delicatessen. 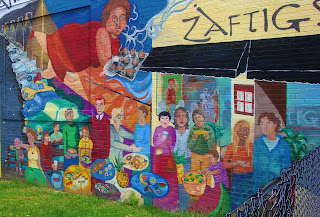 This Jewish-style deli has been a Brookline favorite ever since they opened 14 years ago...and for a very good reason.  Their menu is so expansive that you are guaranteed to find something that whets your appetite.  They have many of the customary Jewish deli foods, including Sweet Noodle Kugel, Chopped Liver, and - of course - piled high pastrami, corned beef, and beef tongue sandwiches.  [Wanna get really traditional?  Don't even think about ordering your pastrami on anything but rye bread and be sure to slather on plenty of spicy brown mustard!]  However, Zaftigs has a whole host of other menu choices for breakfast (which is served all day), lunch, and dinner.
On my visit, we chowed on the towering chicken-stuffed Jax sandwich and a gooey and bacon-y grilled cheese! 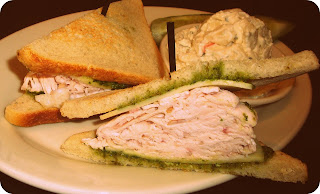 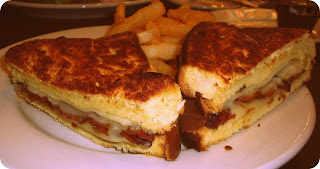 Craving something sweet?  While there are plenty of desserts to choose from, there is also a tempting glass display case filled with cupcakes and other sweet treats.  Based on the frosting's looks alone, I chose this yellow cake cupcake and was not disappointed. 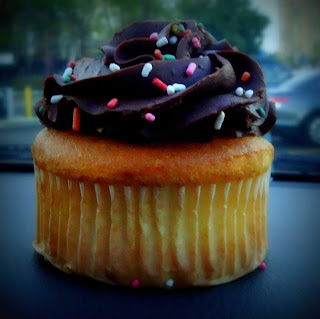 Sometimes, it is the little things that count in a restaurant setting.  Such as the complimentary bagel chips (yum!) or the unique artwork covering the walls inside and out or the offering of special Passover and catering menus.
Zaftigs is located at 335 Harvard Street, Brookline MA.  A second location has recently opened at 1298 Worcester Street, Natick MA.
Posted by Little Miss Hungry at 10:17 AM No comments:

Do women need their own brand of beer?

Me thinks a resounding NO!

I came across this article today and think it is incredibly ridiculous!  Personally speaking, I enjoy drinking beer for the taste and (the already multiple) varieties available.  The women I know that don't drink beer don't drink it because they don't like the taste, so I can't really see how "girly-fying" it will help that in that situation.  [It also annoys me that every so-called "manly" thing has to have a female equivalent...i.e., the stupid pink sports shirts.  But, that's another story for another time!]

What do you think?
Posted by Little Miss Hungry at 4:35 PM 2 comments:

Need a quick, easy, and healthy dish to throw together in this summer's heat?  Look no further than this delightful salad comprised of crisp veggies, three kinds of beans, and a whole heap of cilantro!

I found this Mexican Bean Salad on Allrecipes a few years back and it has been a summer staple ever since.  Do a little chopping, whisk up the dressing ingredients, toss everything together, and you've got yourself a refreshing summer salad.  [Don't mind the crappy picture quality.  It really is a gorgeous array of colors!] 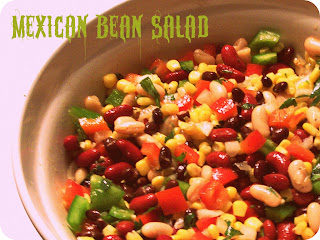 It is colorful, healthy, flavor-packed, and, well, just make this a.s.a.p. and taste it for yourself.

Take it from me, a known pickle addict - some of the best pickles I have ever eaten are made here in Boston!  Grillo's Pickles have been around for a few years but are really just starting to make a name for themselves now.  I was introduced to these amazing spears at the Phantom Gourmet Food Fest in 2009 and have salivated over them ever since. 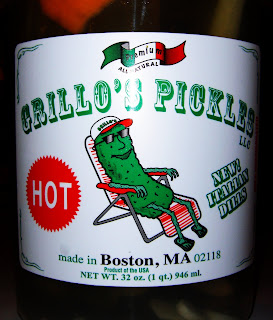 Funnily enough, Travis Grillo started selling his family's pickle recipe from the back of his car!  Next, he moved to Boston and sold them from a pickle cart...the first pickle cart in the world.  (You can still stop by the cart at Park Street T-stop.)  Now, Grillo's Pickles are much more accessible as Whole Foods began carrying the pickles in their refrigerated section.  Additionally, other stores are now beginning to stock Grillo's and the pickles can also be found in parts of Connecticut, Maine, Rhode Island, and New York. 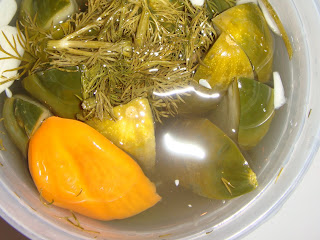 Grillo's have a wonderful crunch and a freshness that is uncommon in other pickles.  Check out the real hot peppers and dill above...it's no wonder that these are packed with pure flavor.  The hot variety is my favorite, though they do also make delicious dill spear.  Two new seasonal products have recently been added to the line: pickled green tomatoes and pickled carrots.  I'll have to get my hands on these puppies soon.  :) 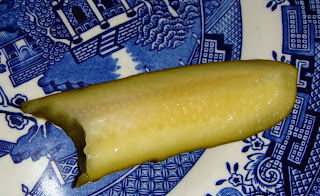 Something else that I discovered about Grillo's and makes me love them even more?  You can buy Grillo's Pickles Converse high-tops!  *Hearts*

Check out Grillo's Pickles at Whole Foods or visit their website for a list of other retail locations.

(Note: Grillo's Pickles did not endorse or in any way promote this blog post.  This is a product I personally use and enjoy.  All opinions are strictly my own.)
Posted by Little Miss Hungry at 3:09 PM No comments:

Don't You Just Love a Bargain?

Sure, you could get a buck burger at McDonald's but you shouldn't....ever.  Especially not when this deal is around!  Bar Louie obviously has much higher quality burger, they are cooked to order, and you have a choice of cheeses (though cheese will run you about 50 cents more - oh, the humanity!) and other toppings.  Not to mention a great variety of other menu choices, a full bar, and a roof deck for those gorgeous summer nights.

Other locations can be found on the Bar Louie website.
Posted by Little Miss Hungry at 7:19 AM No comments:

Nothing seems to signal summer more than the start of tourist season here in Massachusetts.  Crowds flock to the Atlantic's shores to cool off and recharge......and eat, of course!  While spending a day on Martha's Vineyard, I caught dinner at The Offshore Ale Company.

This Zagat rated restaurant and brewing company has received many accolades over the years, including the vote for Best of the Vineyard from 2004 until 2009.  The restaurant seats many indoors though I recommend that you snag a seat on the hedge-lined patio.  Next, grab the beer menu and search out that perfect cold one.  May I also suggest that you grab some of the complimentary peanuts while waiting for your beer...and toss them shells on the floor.  :)
Offshore serves lunch (11:30a-3p), an afternoon pub menu (3-5p), and dinner (5p-close) so expect that the menu does vary at times.  However, the majority of the menu is typically available.  While there is the standard pub fare (think wings, calamari, burgers), there is also plenty of other choices.  Offshore offers a wide variety of fresh seafood, hearty dinner fare, and brick-oven pizzas....including a delicious sounding Roasted Duck Pizza I am dying to sink my teeth into!
However, on my trip there, we grabbed a Caprese Salad with juicy chicken, colorful tomatoes, and thick slices of mozzarella (though, sadly, it seems not to be on the menu this year)...
...a Chicken Quesadilla absolutely stuffed with chicken, spinach, tomatoes, and gooey cheeses....
...and the Kettle of Steamed Mussels in a tomato-fennel broth.
Now that I've wiped the drool off of my keyboard, here are the extraneous details...
The Offshore Ale Company is open 7 days a week, year round, but do check on the closing time as it varies from season to season.  Swing by on a Tuesday or Wednesday for some live music!
Offshore Ale Company is located at 30 Kennebec Ave, Oak Bluffs, MA.
PS Thirsty for some of their brews but no vacation time in sight?  (Boo!)  No worries - Offshore Ale can also be found in some liquor stores and restaurants throughout Massachusetts and Rhode Island.
Posted by Little Miss Hungry at 9:50 PM No comments:

Make It: Fettuccine with Olive Oil, Garlic, and Red Pepper

In need of a quick and easy dinner this summer but don't want to heat up your kitchen?  This dish fits the bill.  Minimal stove time, maximum summer flavors.  And, as an added bonus, it is a Cooking Light recipe...so you won't need to worry about fitting into that bathing suit.  ;)

Start by sauteing the garlic, parsley, and pepper.  Throw the saute into a quick creamy sauce (secret ingredient: pasta water...be sure to save some before draining!) and toss with the hot noodles.  Add a side salad and you're done!

Obviously, in my picture, I used spaghetti rather than fettuccine and subbed in some basil instead of the parsley.  This dish is very versatile so use whatever you have on hand.  Throw in some grilled and diced up chicken for a shot of protein, mix in some summer squash, experiment with other spices, anything.  There's better things to do during these precious warm months than fretting over recipes!